A research lab with an interdisciplinary lens for risk

RiskLab Finland is a research group at Arcada and Hanken  with strong collaboration with companies like Silo.AI, with the objective to study and develop the fields of risk analysis through machine learning and visual analytics.

The theoretical and empirical study of positive and negative risks, particularly systemic risks and vulnerabilities to entire systems and with real economic costs

The use and development of statistical and mathematical models and information technology for the study of risk, with the ultimate aim of risk measurement.

Enhancing the understanding and communication of risk by development of interpretable models, and their coupling with visual, interactive interfaces.

RiskLab Finland is an independent research laboratory at Arcada and Hanken with ties to an international network of RiskLabs. Since the first RiskLab was founded at ETH Zurich in 1994, branches have been set up most often in partnership with Algorithmics Inc at University of Toronto (1996), in Munich (1997), at Cornell University (1998), at Cambridge University (1998), at Universidad Autonoma de Madrid (2000), and at Cyprus International Institute of Management in Nicosia (2001), as well as a Risklab China Research Center in 2006 and RiskLab Australia in 2016. The strategic alliance RiskLab Global, founded in 2010, is headquartered at University of Toronto, Canada, and aims at supporting collaboration within the international network. The common objective of the network of RiskLabs is a combination of academic research, industrial innovation and governmental oversight in financial risk management.

The Finnish section of RiskLab focuses generally on the development of machine learning and visual analytics for risk measurement. Particular focus is given to the study of systemic financial risks and vulnerabilities, and their sources, with a focus on the financial system as a whole. RiskLab maintains the VisRisk platform for visual systemic risk analytics. VisRisk was a collaboration with Infolytika Ventures who developed the interface technology in use. 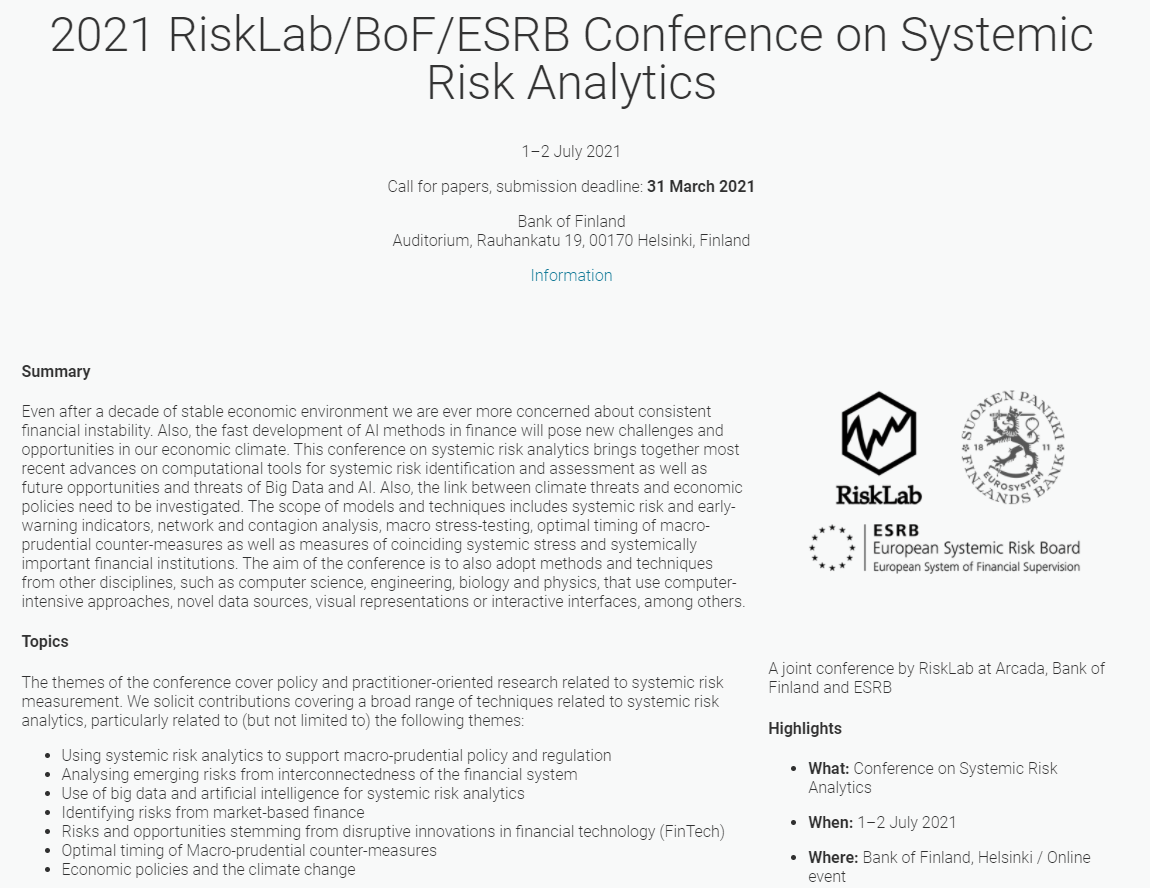 Recent waves of financial instability have sparked an acute interest in analytics for systemic risk measurement. The Annual RiskLab, Bank of Finland and European Systemic Risk Board Systemic Risk Analytics Conference brings together most recent advances on computational tools for systemic risk identification and assessment. The scope of models and techniques includes systemic risk and early-warning indicators, network and contagion analysis, macro stress-testing, as well as measures of coinciding systemic stress and systemically important financial institutions. The aim of the conference is to also adopt methods and techniques from other disciplines, such as computer science, biology and physics, that use computer-intensive approaches, novel data sources, visual representations or interactive interfaces, among others.

As of 2016, Arcada organizes a Master’s program with a FinTech track. The fist batch started in the autumn of 2016 and most courses related to FinTech will run the first time in the in 2016/17 and 2017/18. The first batch included approximately 20 students and speakers from several industry speakers, including Päivi Heikkinen (Head of Cash, Bank of Finland), Julian Kaljuvee (Director, Founders Capital Ltd), Willem Schudel (PhD, Strategy Adviser, De Nederlandsche Bank), Bo Harald (former Nordea and Tieto executive), Markku Koponen (Head of Operational Risks, Financial Supervisory Authority), Susanne Chishti (CEO, Founder, FINTECH Circle), and Päivö Eerola (former CEO of Nets). The MBA program provides skills to grow in the FinTech market. Students get an overview of FinTech in the past and possibilities for the future, as viewed from the perspective of the financial industry, regulators, startups, investors and academia. The courses are divided into topics concerned more with financial transactions and data and analytics.

VisRisk is RiskLab’s online interactive platform for studying data related to systemic financial risk. Plots show data such as risk indicators, and model output such as crisis probabilities, allowing you to explore the abundant data interactively and find meaningful patterns. Maps show complex data on a comprehensive display, using analytics to transform and make high-dimensional data easier to grasp visually. Networks focus on interlinked data, visualizing structure beyond time and space, providing means for qualitative network analysis. The VisRisk platform was a collaboration between RiskLab Finland and Infolytika Ventures who developed the interface technology in use.

Risklab is also located in Hanken. Hanken is a leading, internationally accredited university with over a hundred years of experience in education and research in economics and business administration. Our research is of an international high standard and is the foundation for all education. Hanken has close ties to the business community and an active alumni network with over 13 800 alumni working in more than 70 countries. The study environment is international and we have campuses in Helsinki and Vaasa, Finland.

RT @ollirehn: Words for the Weekend. On #structural #economic changes and their impact on #monetary and #macroprudential policies. My keyno…

We've been featured on